Theresa May duped by anti-Corbyn bile of Conservative-supporting press 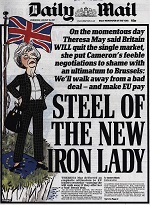 If Jeremy Corbyn was the unintended beneficiary of the vilest general election reporting of my lifetime, then Theresa May was the true casualty of the bile spewed out by Conservative-supporting newspapers.

She was so cocooned by the deadly embrace of the anti-Corbyn hate of Paul Dacre’s Daily Mail and Rupert Murdoch’s Sun that she was duped into thinking that having been crowned a popular hero by the UK’s two biggest selling tabloids, voters were bound to agree.

Press adulation is seductive for any Prime Minister. May was lauded from the moment she stood for the party leadership and then promised to deliver a hard Brexit.

The 52-48 Leave vote was seen by the Brextremist press – Sun, Daily Mail, Daily Express and Daily Telegraph – as their crowning achievement, an outcome that would not have been delivered if it had not been for their relentless 30-year demonisation of the European Union.

The fatal mistake of May and her team was a failure to realise the extent to which young people who felt their future had been stolen by Brexit were becoming highly politicised, and that unlike their parents, they relied on social media rather than the press.

Older voters still get most of their information from newspapers, but sales are steadily declining, mirroring the death rate among elderly Leave voters.

Whatever Dacre or Murdoch might think, their tabloids are increasingly paper tigers – their voice doesn’t count among Britain’s burgeoning ranks of young voters, so their daily diatribes against Corbyn & Co counted for little, other than to reinforce the views of ageing and already committed Tory voters.

May, trapped in an echo chamber of a phoney propaganda war, was presented by the Mail and the Sun as an all-conquering hero, feted for her promise to walk away if necessary from the EU negotiations, given that “no deal is better than a bad deal”.

Her much-promoted invincibility was bolstered by opinion surveys – commissioned by the very same press proprietors – that suggested she was the most popular Prime Minister for 40 years, and that the Conservatives had a soaring un-assailable lead of 23 points that could deliver a majority of up to 172 seats.

A further miscalculation was a misreading of the mood change within the Parliamentary Labour Party. Amid all the damning headlines about Corbyn being the terrorists’ friend, there had been a significant shift in opinion among those Labour MPs who had refused to serve under his leadership.

What Conservative headquarters should have picked up on was the reaction to the manifesto.

Initially there had been opposition within the party hierarchy, but criticism fell away in the face of the growing acclaim for the pledges to end university tuition fees, provide free school meals and maintain the triple lock for pensioners and winter fuel allowances.

Labour MPs were out in their constituencies, fighting on the ground, no longer demanding another leadership election.

Above them the tabloids’ anti-Corbyn air war spluttered on, failing to hit the intended target, but still reinforcing a belief in the Tory high command that the negative campaign techniques of Lynton Crosby would deliver.

With the Mail and the Sun pumping out distortions that rivalled the infamous television attack advertisements of a US Presidential campaign, there seemed every likelihood that once again the effectiveness of the unrelenting anti-EU propaganda before the referendum would win over voters come polling day.

Of equal significance was the calculated pre-election strategy of the Tory press to play down the consequences of a hard Brexit.

A well-honed role of rabid propagandists is to know when to change tack.

During the unexpectedly long seven-week lead-up to polling day, the name of the game was to play down the flow of bad news that will become a tsunami the closer the UK gets to a hard Brexit.

Any mention of the downside of the Leave vote was quietly side lined. Mrs May’s staunchest Brexit cheerleaders ignored the impact of the transfer of bank and finance jobs to rivals such as Frankfurt, Dublin and Paris; the loss of academic and research funding; the falling off in industrial investment; or the steady drift away in skilled EU workers.

Instead the Tory press trumpeted the positive message that a government under her “strong and stable leadership” would get the best deal for the UK.

This was the 15th general election that I have worked on as a reporter -- plus referendums in 1975 and 2017 – and my vast accumulation of press clippings and scripts bears me out: the tabloid denigration of Corbyn and his immediate colleagues was far worse than any comparable assault on leaders from the left, indeed it was so atrocious I felt ashamed to think this could be considered journalism.

While I am no longer a front-line reporter, I was close to the action for some of the most odious and highly personalised press campaigns of recent years, at a time when newspapers had far greater clout than they do today.

My personal starting point would be the 1983 general election and the tabloids’ demolition of Michael Foot. Onwards from Margaret Thatcher’s 1979 election triumph, the Tory press was in the ascendancy and papers such as the Sun, under its editor Kelvin MacKenzie, led the pack.

Arthur Scargill’s vilification during the 1984-85 miners’ strike was on a par with the sustained assault on Corbyn, but there was a fundamental difference.

Holding a strike without a pit head ballot gave Thatcher a tactical advantage, reinforced when she could argue that violence on the picket line threatened a breakdown of law and order.

In Foot’s day, long years of confrontation with the trade unions and memories of the 1979 winter of discontent were fresh in voters’ minds, just as the legacy of the many disputes of the Thatcher and Major years were used by the Tory press to undermine and attack Neil Kinnock in the 1987 and 1992 elections.

The great similarity between the treatment meted out to Kinnock – and then to Jeremy Corbyn in nearly two years as Labour leader – was that so many of the negative stories used against them had simply been manufactured by the likes of the Sun and Mail.

In Kinnock’s case, I knew from personal experience – and from my acquaintance with the journalists involved – that numerous tales that were intended to demean him, were pure invention.

In Corbyn’s case, the narrative about him being the terrorists’ friend was based on regurgitating earlier press coverage of his encounters with Sinn Fein leaders in Northern Ireland, or Hamas and the Palestinians, that dated back 30 years or more.

These stories lacked credibility: John Major and Tony Blair had established comparable lines of communication in preparing for the Northern Ireland peace agreement which had, after all, delivered two decades of peace and stability.

In the view of many of his young admirers, Corbyn’s readiness to reach out and engage in dialogue was to be praised, not condemned.

But the tactics of the Mail and Sun in focussing relentlessly on Corbyn’s past encouraged broadcasters to raise the issue repeatedly in radio and television interviews, which in turn gave the Tory press another fresh peg with which to rehash their earlier coverage.

I am already on record as admitting that I was ashamed of the broadcasters’ failure to hold both sides to account during the 2016 referendum campaign; for their reluctance to analyse and investigate the claim and counter claim of Remain and Leave.

Instead listeners and viewers had to endure ill-informed Punch and Judy reporting, which while balanced between the two sides, did little to educate the public about the choice they faced.

Perhaps more than any other factor, a litany of scare stories about increases in immigration swung the vote to Leave, much to discomfort of David Cameron who had benefited from the negative attacks deployed by the Conservative press during the 2014 referendum on Scottish independence and the 2015 general election.

My guess is that the 2017 general election has finally exposed the growing impotence of Britain’s tabloid tigers.

Nonetheless the printed press does continue to influence, and sometimes mould, the news agenda. Perhaps their final denouement will be advanced when BBC Radio, News 24 and Sky News scale back their press summaries and newspaper previews.

So long as press headlines continue to be treated as news – and the front pages are reproduced in extended television press reviews – the tabloids will retain at least some of their previous clout.

Perhaps the BBC could make a start by including a health warning in press reviews by reminding viewers and listeners of a paper’s political affiliation: a quote from the Mail and Sun would be prefaced by the line that this was a paper that had advised readers to vote Leave in the EU Referendum and Conservative in the 2017 general election.

A younger generation might then realise that the UK’s much lauded “free press” is in fact a “politicised press”, and that the partisan nature of their reportage should not be ignored.